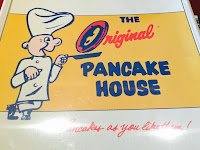 yes, yes, i know that the original pancake house is an american chain (and one that i first enjoyed in so.cal!), but there was something about my experience, there, while in seoul, that warrants talking about here. 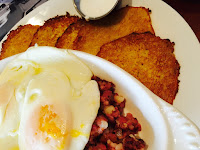 the (sort of recently) opened a branch of the original pancake house in itaewon (there was already one in sinsa, on garosu-gil. but, really, who goes south of the river when s/he lives to the north? hahaha) and friends and i were hankering to try. have you had their potato pancakes? that was the firs thing i'd ever had at the original pancake house in the US and i was ready to enjoy them again. of course, this time, we enjoyed with with a hash.

we entered the original pancake house a little later than a usual lunch hour, though a reasonable boozy brunch hour (we hadn't planned on boozing, but perhaps this creates some context?). we were fully anticipating a long wait, after reading others' blogs and about their experiences. maybe we were just lucky because we were directed to our table immediately, and one next to an outward facing window at that!

the decor at the original pancake house is just like i would have imagined, just like at home, just like an american diner serving breakfast all. day. long.

the additional reason for our visit was because a had seen, over and over again, some souffle dish that she wanted to try. i was happy to oblige. 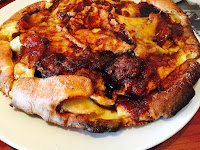 we ordered the apple souffle, though without ice cream. we thought it a good idea to add some fruit to an already decadent dish option. what we were not prepared for was the size. we should have just ordered the apple souffle on its own as it was large enough to feed the both of us. of course, we consumed almost the entire thing (and after we enjoyed the potato pancakes with the hash, of course). and this doesn't include the countless cups of coffee and soda we consumed as we sat, chatting, and enjoying ourselves.

looking for a little bit of american while in korea? yes, you have lots of options in itaewon. be sure to include the original pancake house to your list!

online: http://www.originalpancakehouse.com/
Posted by grace at 1:19 AM