meskerem
2434 18th street NW, washington, DC 20009
tel: 202) 462-4100
hours: 11am-12am monday-thursday, 11am-2am friday-sunday
what was consumed: ... i forget. it's been quite some time since i've been (probably because adams morgan is soo far and i've found some other places that have taken my fancy~)
i love ethiopian food (have i mentioned that before? hahaha). i love injera, i love the dishes, i love eating with my hands. when i first came to DC, people were telling me to go to meskerem. i ended up having ethiopian at awash first, but christine and i head over to meskerem just a few days later.
the food at meskerem was good. they have the usual ethiopian fare (i.e., i ask the server what i want and ask him/her to choose according to his/her judgement - ha!), though i'll have to admit that their spicy was not as spicy as i like it. good injera as well - delicious! also, they have a great honey wine - i definitely recommend it. the ambiance is good as well - very "authentic," or so i'm told (what do i know?!) with the tables, chairs, decor. the downside is that this pretty popular ethiopian restaurant is located in the even more popular adams morgan. aka a wait to get in, lots of people ... both a pro and con. maybe i'm just impatient - ha!
online: www.meskeremonline.com (under construction)
Posted by grace at 3:00 AM No comments: ye chon
4121 hummer road, annandale, VA 22003
tel: 703) 914-4646
hours: 24 hours!
what was consumed: seafood pancake, ahl-tang (spicy roe soup - my favorite!), dol-soht bi-bim-bahp (rice and veggies and stuff mixed in a stone bowl), lots of bahn-chan (side dishes), etc.
i love korean food. granted, being korean puts me in a place to have had lots of good korean food, made the way mom makes it (and yes, my mom is a fabulous korean gourmet! she also does things organically and is often apt to experiment with asian fusion dishes. i could go on forever about my mom ^_^). also, having spent many of my life's years in so.cal, and then in seoul (i miss eating in korea!! so so so good~), i've been spoiled with being able to get good korean food out of the home as well. of course, everyone's preference is going to be different. 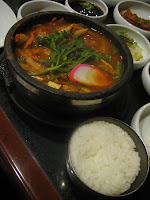 my absolute favorite when i go out to eat non-bbq korean food is ahl-tang (spicy roe soup). yechon makes one that's quite good and it comes out in a stone bowl, the way that it should. there is a lot of roe mixed in with the standard fixin's (radish, onions, etc.) in a spicy broth - yum! sometimes, people make this soup too salty (or maybe i prefer my food with less salt), but yechon makes it well. i've already had it a couple of times and each time i've enjoyed it (without having to add water to make it less salty). people tell me that this is what you're supposed to eat when you drink soju (people have even looked at me funny for having it while not drinking adult beverages - who cares, folks! let me enjoy), but i find myself eating it all the time! delicious~ probably the most popular dish of all is the dohl-sot bi-bim-bahb. not necessarily the most popular for me, but all of my non-korean friends look and ask about it. it's a rice bowl with veggies, egg, and some meats in a stone bowl. the rice sizzles when they bring it to you and you let it sit just for a little bit so that the rice on the bottm toasts quite nicely. you then mix the ingredients for some grand deliciousness! i usually add a nice helping of hot red bean paste to add some delicious spice to the dish.
yechon is a great place to go to for some good korean eats any time of the day. they have a pretty extensive menu (with japanese treats as well), so it's a good idea to have a general idea about what it is you want beforehand. a note about the service - the service at yechon is much like any other korean restaurant (for those who have been to korean restaurants, you know what i'm talking about). be aware that, especially on the weekends, lots of young folks head to yechon at the end of their weekend's festivities. they don't sell alcohol after 2am (i think it's then), but a nice hot bowl of soup is a great way to end the day ^_~
online: http://www.yechonrestaurant.com/
Posted by grace at 1:40 AM No comments: