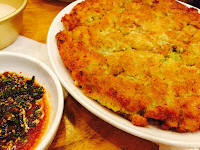 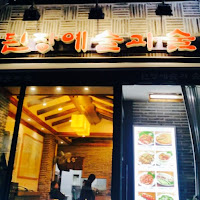 mjk found a new acupuncture place and suggested we try a new dinner place, partly because the reviews commented on the delicious dwen-jang jji-gae as well as the soy sauce crab (an obsession of ours). we were happy to oblige. 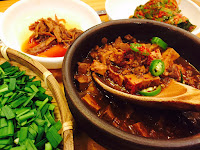 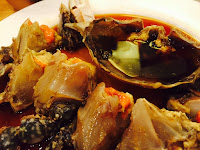 after work, we walked over to dwen-jang-yeh-sool and sool. we were looking forward to more traditional korean fare, as much as we enjoy fusion and international cuisine. upon being seated and ordering, our table quickly filled with all sort of side dishes (ban-chan) - YUM - including a mung bean pancake, one of my favorites. the dwen-jangg jji-gae was salty, mixing well with rice or in a lettuce leaf. so delicious! the soy sauce crab was also up to par, though not as salty as i would have liked (especially in comparison to the dewn-jang jji-gae), though this didn't prevent me from devouring my entire plate. hehehe ...

one of the classic korean dishes is dwen-jang jji-gae (fermented soy bean paste stew). some people find the smell a bit strong (it is), but definitely something to try. and if (no, when) you do, look up dwen-jang-yeh-sool because they certainly do a good job!
Posted by grace at 3:23 PM