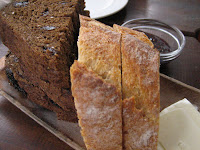 commonwealth (now closed. sad.)
1400 irving street NW (btwn 14th & hiatt), washington, DC 20010
tel: 202) 265-1400
what was consumed: jacket potatoes, fried chicken, rocket w/farmstead cheese & lemonette, bucket of chips, grilled squid, smithwick's beer battered fish & chips, ploughman's lunch surrey ham& wildflower cheddar&pickled cabbage&apple&bread, puffed bread thing (i don't remember what it's called)
after seeing commonwealth (and loving gastropubs), i finally got a chance to make my own visit (thanks for the suggestion, christine!). and with this being in ines's neighborhood, it was fun to have her come along. 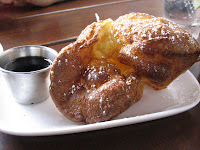 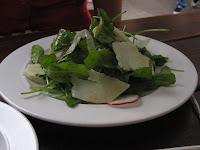 so, on a day where we were looking for something close (and good, of course), we picked up ines and head over to commonwealth.
common wealth has both outdoor and indoor seating. despite the ominous clouds, we grabbed a seat outside (the last one with an umbrella, mind you) and started to peruse the menu. so many options! so i want a collection of gastropub "snacks" or a meal meal? do i want something heavy or light ... or a combination of all of these things? when our very attentive server came over and over again to take our order, this was the dilemma i was under. of course, the server was really nice, answered all of our questions, and paiently waited for us to make our decisions. 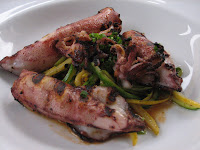 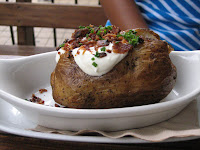 our meal started with bread - a really nice white with herbs and stuff along with a really nice brown with raisens. and while i'm not a fan of the sweeter breads, there was something about this otherwise dense bread that made me want slice after slice after slice (which i refrained to do after ordering the massive amounts of food that we did. why do we do this?! gluttony, i say, gluttony. oh, and food envy). and while i was thinking a nice beer could go along with the meal, we opted for some club soda (and cola for ines) instead. one of the neat things is the cups that commonwealth uses - these oval glasses! love the detail. 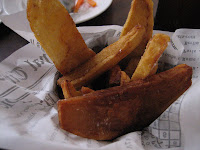 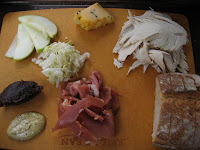 next, appetizers. loaded potatoes, salad, puffed bread, grilled squid. omg, so delicious. the grilled squid (my choice) came on a bed of zuccini noodles (always delicious) and was grilled just the right amount. i have to admit that it was a bit on the salty side, but i do prefer my food salted less than the norm, so i can't really say too much about that. but the loaded potato? good choice, ines! she got the creme fraische and bacon topping - you can't go wrong with that! and apparently europeans call arugula "rocket." i don't know why i thought that was so funny ... 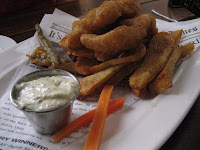 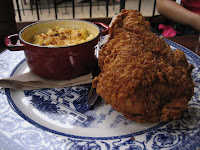 by the time the entrees came out, i have to admit i was pretty full. meh~ of course, that didn't prevent me from continuing to eat. the fried chicken, the beer battered fish, all delicious. but the de-constructed sandwich? right up my alley. so delicious! the different meats, the salty cabbage, the mustard. yum.
ok, i'm finished talking about the food. it's making me hungry ... again.
in other news, the very convenient location of commonwealth (right off the columbia heights metro) make this a likely place for return. it's too bad, though, that the reviews for commonwealth aren't better (i wonder if it suffers from the same unreachable/unreasonable expecations that i have for korean restaurants). some people were disappointed with their beer selection (hmmm ... i'm afraid that i'm turning more and more snobbish when it comes to beer. that's not bad!). no matter - i will have to go back and try commonwealth at other times of the day ... and i will be happy to do so!
online: http://www.commonwealthgastropub.com/
Posted by grace at 1:59 AM

The puffed bread is called Yorkshire Pudding! Did you get it with gravy? I'm a big fan of Commonwealth, but haven't been since the warm weather started...it's a great place to put on the winter layer and wash it down with a stout.