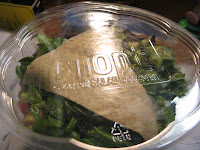 chop't
1105 1/2 19th street, NW, washington, DC 20050 - there are a number of different locations here in DC (and, apparently, in NYC), but i've only been to the one near work ... su's dprk encounter (encounter? confrontation?) happened at the chinatown location, in case you were wondering ... if you don't know about su's experience, let me know and i will happily share - haha ...
tel: 202) 955-0665
hours: monday-friday 10:30 am-9pm, saturday 11am-5pm
what was consumed: chop't salad - make it yourself, folks! i usually put spinach and mesculun mix, corn, tomatoes, chick peas/garbonzo beans, mushrooms, and broccoli with a little bit of the texmex ranch dressing
growing up in so.cal, the idea of salad bars was pretty ... normal. that is, there were always salad bars (even in the carl's jr.s! ahh, i miss carl's jr. ...) and the idea of "make your own" was found everywhere. when i first came to DC, this was one (of many) things i missed because salad bars are no where to be seen. not really, anyway. i mean, there are places that will make salads for you (e.g. cosi), but nothing really comes close to souplantation/sweet tomatoes!!!
then, i started seeing chop'ts everywhere. they sort of reminded me of cosi with their plastic containers and the like, so i didn't think anything of them. then, one day, i had a hankering for a nice salad (as i often do - i will always take a salad over dessert ... even if i've already had salad - ha!) and thought i'd give chop't a try ... and then i proceeded to visit them 2 more times that week. i will have to say, then, that chop't is good to go in my book! 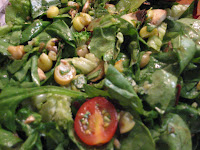 so, for those of you who don't know (or who've never been), it works like this: you pick your lettuce, you pick your fixin's, they chop up all of the different ingredients (thus their name), mix in the dressing, and then you eat. simple.
though, if you go during lunch, there is usually quite a line. the line moves pretty quickly, but you'd better know what you want by the time you get to the middle of the line (i say middle because that's where they begin taking your order). if not, the people behind the counter will move onto the next person and when you get back into line, people behind you get all mad. don't mess with hungry cubicle folk during lunch! haha ...
chop't also has a variety of pre-set combinations. you tell them you want "---" on the menu and they will make it (i.e., they're not pre-made; rather, the ingredients are just already pre-set). in addition to salads, they also have wraps. something for everyone! i think the reason i like chop't better than some of the other salad places is because i can make the salad the way that i want, with the ingredients that i want, at a pretty reasonable price. they have lots of fixin's, lots of dressings, so if i wanted, i could get so many different combinations (this is starting to sound like a math problem: how many combinations of chop't salads can i get if i have 4 lettuce types (no half-and-half as grace does), 4 of the 15 fixin's, and 15 dressings, provided that even something as little as changing the dressing changes the option ... ? any takers? haha ...)!
and while i have yet to go again this week, i imagine they will be seeing more of me now than they have in the past. hooray for salad!!
online: www.choptsalad.com
Posted by grace at 6:34 AM