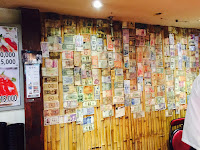 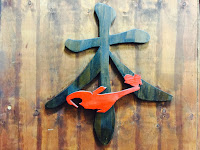 have a hankering for sashimi? i usually do, more often than not. much like lots of other things, i don't consider myself a connoisseur (i.e., i'll still super enjoy my sashimi even if it was previously frozen. i know. there may be some sort of wrong in that statement, but ... oh well); rather, i enjoy the good eats with good friends. we'd been told that the restaurants in the gong-dok area, at one time, catered to the japanese tourists and businessmen in korea. so, when A made a suggestion, i was all in. M, A, and i resolved that we had to go. asap.

after work, we head over to hon-cham-chee (the nearest subway stop it ae-oh-geh, but we walked a tad more from gong-deok which is more convenient for us). we knew there was a GS25 in the building and when we didn't see the "hon" sign on the outside, we figured the restaurant was probably somewhere in the building (we were right). while we were on the early side for (korean) dinner, we were surprised to see that there was no one inside. oh well. we opted for bar seating (my fav) and all ordered the special-cham-chee. the chef wanted to make sure that we knew the price (we paid krw 60,000 pax) was per person. we assured him that we did and that we were ready for a great meal.

the meal started with a small bowl of rice porridge ... and then came the slices of tuna: 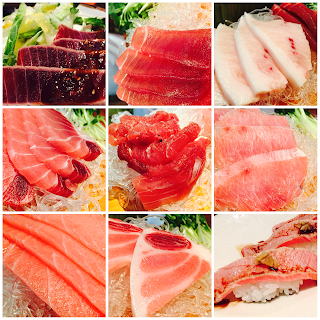 seriously, i didn't even know some of those cuts existed.

some cuts were more fishy, some were more fatty, some were more chewy, some had some cartilage (intentionally) ... but i definitely enjoyed the variety. apparently, you're supposed to dip the tuna in a little soy sauce (my preferred as well), with a the tuna wrapping a bit of wasabi (which i voluntarily omitted) and a bit of the greens. i would have not thought to wrap the greens, but it was pretty tasty. the server also brought out some dried seaweed/lavar in case we wanted to wrap the tuna in seaweed (we didn't, though we tried with a cut and it was pretty darn good too).

what's more, in between the different sashimi, they will bring out a variety of dishes to round out your meal: 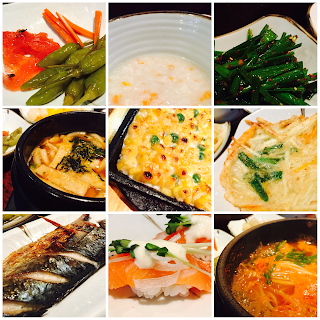 the rumor (and maybe experience) is that the chef will keep cutting tuna slices for you until you order the final course, the spicy fish stew (bottom right corner). i'm not sure if this is true, or if this is just for those who order the special tuna, or or or ... but our chef definitely kept bringing us things to eat, both tuna sashimi as well as more conventional sushi (like masago hand rolls). we seriously rolled out of hon cham chee ... happy :D