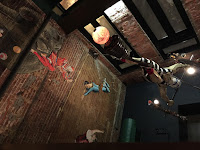 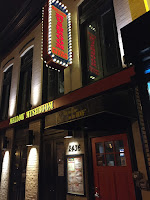 what was consumed: pizza! veggie lovers, meat lovers ... and beer.

despite previous trips to wdc, i didn't eat as much pizza as i would have liked. so, before the turkey trot, we opted for some carb-o loading the pizza way. with the cuisine selected, bjl suggested we go to mellow mushroom. i was a little skeptical especially because mellow mushroom is a chain (think what you will about chain restaurants), but i was happy to try. that it's down the street from home was a total plus, but the delicious pizza we ate is why we'll go back. 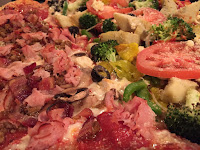 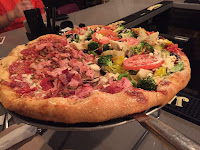 mellow mushroom has a variety of different pizzas, along with the option to make your own. they also accommodate so that if you can order a pizza that is half one kind of pizza and half another. they do a standard crust, and when you see that your pizzas are overloaded with toppings, you're glad that you have that little bit of crust to help shovel the toppings in. the veggie pizza was like a salad, made up of well-prepared veggie chunks, a top a cheesy crust-plate. and the meat lovers? a meat-y equivalent, that is for sure.

big beer drinker? mellow mushroom also has a beer club. if you drink at least a pint of each of their beers, within a given period of time (i forget what it is), you get your name on their wall of fame. the club also has beer specials for its members. a neat way to try all of their different options! 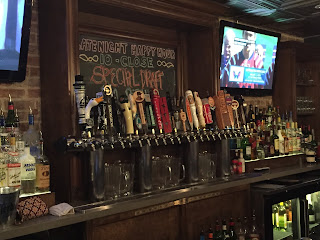 mellow mushroom also has a nice rooftop seating area, according to bjl. i'll have to check it out next time when the weather is not so bone-chilling. the inside, though, is also really interesting. they have a circus motif with an acrobat suspended from mellow mushroom's high ceiling right as you enter.