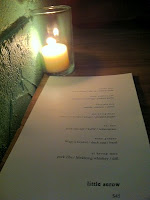 little serow
1511 17th street NW, washington, DC 20009
hours: tuesday-wednesday 5:30pm-10:00pm, thursday-sunday 5:30pm-10:30pm
what was consumed: the daily menu. and wine. delicious wine.
oh, little serow.
i hadn't heard about little serow until friend e wanted to go before leaving washington dc. on top of always being up for checking out new places, this invitation was even greater because e is super duper cool. little serow opens at 5:30, but we weren't sure what the line wasn't going to be like, as they don't take reservations (though if there's a wait, they'll take your number and send you a text message to let you know when your table is ready) and the entire place seats maybe 30 people. so e, t, and i decided to meet earlier, maybe grab a drink to check out "the line," then head over soon after they opened. we may have been a bit ambitious about your line-waiting, though, as we were the first ones to enter the restaurant soon after their doors opened. that was a-o-k with us! 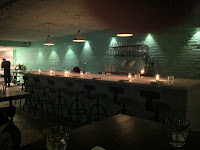 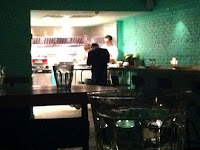 this, of course, was after we had spent an embarrassing number of minutes walking around in front of the restaurant trying to figure out where it was. little serow (i think) is characterized as a "pop-up" restaurant. there's no big sign telling you where to go, thus explaining our confused pacing. i wonder if the staff in the restaurant get a big kick out of watching people walking around with confused faces trying to find the door. ha! 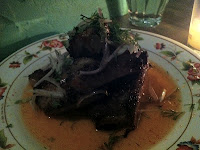 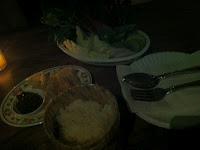 once inside, we were greeted, given a quick introduction and overview of the restaurant (e.g. the theme, fixed price, family style, thai food) and then shown to our seats. when we had questions about the wine/beer list, our server (as well as all of the other servers who came by our table) seemed really well versed in what how things tasted, what went good with what, and so on. maybe it's because i have such little knowledge about this sort of thing (or maybe it's because everything is good in my book), i appreciate knowledgeable servers and am happy to hear what they recommend. 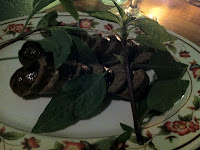 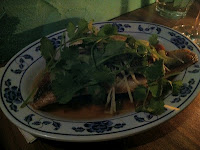 soon, the food began to come out. we were ready for a feast (as we already knew we'd be in for quite a number of dishes), but we definitely got more than we expected. which made us quite happy. everything was served family style (i.e., the larger your party, the larger the portions), but there wasn't so much food that you'd be overwhelmed with the portions. that's good, though, in that there were so many courses. some dishes were spicy, some dishes were fishy, some dishes were crunchy, some dishes were soft, all dishes were colorful. lots of contrasting textures and flavors, all at the same time. there was also a constant supply of sticky rice and sliced (raw) vegetables. i often balled up the rice to soak up delicious sauces (we asked for some plates not to be taken so that we could do just that!) and used the vegetables to cleanse my palate (according to the servers' recommendations) and because i just love veggies. yes, i ate a lot. A LOT. 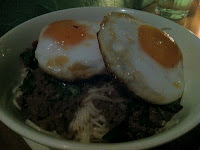 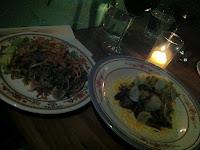 there was also something about the mood of the place. it was really dark inside (so taking photos was quite a feat). all of the servers were dressed in gingham (someone once described them as anthropologie-inspired) and country music was playing in the background. but you know what? totally works. it's supposed to be "country-style" thai food, right? soon after the doors opened, little serow filled up pretty quickly and people were almost constantly going in and out. it was always bustling, but never too loud (that is, i didn't have to yell to hear my dining partners). ambiance is so important; the ambiance at little serow made the dining experience even better.

the meal ended with a nice little bite, not mentioned on the menu. but it was definitely the perfect little bite to bring everything together. (sweetened?) coconut milk on sticky rice. just a little sweet, but not too much. delicious.
gosh. i haven't been this excited about a place to eat in a long time. and i'm not the only one! friends (some who are self-proclaimed foodies, others who've lived in thailand, even others who (like me) just enjoy good food) have been talking about it. a lot. i've been a couple of times now, and i can't wait to go again! that is, i hope it's as delicious (and still around) the next time i come around ...
online: http://www.littleserow.com/
Posted by grace at 9:18 AM