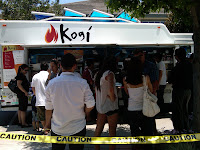 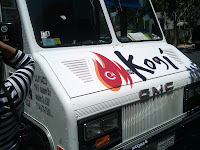 kogi truck
multiple locations
tel: 714) 697-4683
what was consumed: short rib taco, spicy pork taco, short rib burrito
the craze of food trucks is not just on the east. out in so.cal, it's the kogi truck that has been calling out to interested parties for some time now. while in so.cal, i made it a point to look 'em up (i was even willing to drive up to LA! luckily, they also have a truck in the irvine area) and finally got the chance to try the infamous kogi taco from the taco truck ... in one word: YUM (yeah, yeah, i say most things are delicious). for real, the tacos are de-licious! 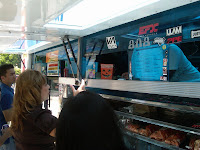 so, they were in my neighborhood (or rather, towards my neighborhood) today, so i made it a point to head out there to check out the truck. i get in line around 1:10pm (their schedule today was to be in irvine between noon-2pm) and be overwhelmed with the line that wrapped around the truck area in the parking lot of the car wash the truck had parked in (apparently, the truck and the business have some sort of deal? i guess that's a great way to do business?). 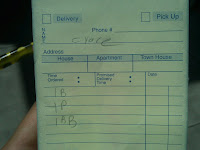 i seemed to be waiting and waiting and waiting, all the while taunted by the korean bbq being cooked in the truck. after what feels like hours and buckets of sweat (it's dry, but hot in so.cal today), i finally make it up to the front of the line. once there, and my order is in, i wait again for my food. while i'm glad that my food is made fresh to order (more or less), the wait is a killer.
here's the other thing. i put in my order and the guy asks for my name. i say "grace" and what does he put down? crace. really? REALLY? in asian infiltrated irvine? maybe it's because he was overwhelmed with the massive number of graces that visit the truck on a frequent basis (no, we do not all look the same)? or maybe he's just hard of hearing? or maybe he was just tired. in the end, it doesn't matter, but i thought it was funny. i proceeded to take a photo and post it here. i digress ... 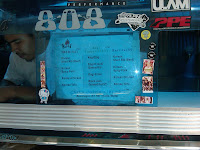 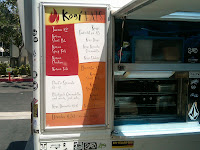 the kogi truck has a number of different options, besides their more famous kogi tacos. a variety of tacos, burritos, sliders, quesadillas, even hot dogs! and dessert! all seem to have some sort of korean flair (e.g. kimchee) and most definitely mixed in with texmex. they even have tofu as an options! yes, they're thinking of the non-meat eater (though i'm not sure how it is that they cook the tofu tacos and burritos. they seemed not as popular as the other options). i ultimately opted for the beef short rib taco, the spicy pork taco, and the beef short rib burrito. 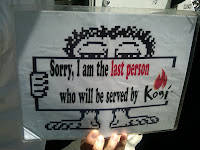 at around 1:35 (while i was waiting patiently in line), someone came out with a little sign and gave it to the guy standing just a few people behind me (see photo) to indicate that no one behind him would be served kogi. and let me tell you, there were people who came even closer to 2pm and were (pretty much) out of luck ... too bad! the guy at the end was really nice about it when people came to ask about the line (and the sign). he must be a regular. i can see how some people may take it over the top, a sort of indication of power (and luck?) in that he/she is the last one. people in line were also saying that the last person is also often rewarded with free leftovers in appreciation for holding the sign. i didn't pay attention to what happened to the guy behind me, but he looked more happy to have made the cut than anything else (man, if i came later, as i had thought to, i would've been so disappointed! and maybe even a little bit angry ... even though it's my fault). 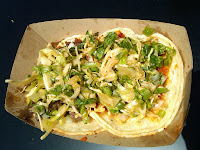 so, when i finally got my food, it was well over an hour since i had gotten in line. people started to get really irritated because of the wait, because of the heat, and because despite the huge line behind there were people who were all, "umm, i'm taking this home. will you package this for me?" hello! self service, people! anyway. about the food. tacos = delicious. i would probably wait in line again if it means i could have these tacos again (granted, i say this now that i've cooled down and my stomach is full. had you asked me while i was in line, my answer might've been different). the meat was well cooked and spiced, both the beef and pork (though i think the spicy pork could've been more spicy. to the kogi truck's defense, they did have a bottle of siracha sauce available for consumption). the lettuce in the taco was also seasoned, with a light almost soy sauce-y flavor which complimented the meat beneath. all of this was on top of 2 corn tortillas that weren't too dry and just right. a note to the hungry: the tacos are small, probably 2 1/2ish inches in diameter (though also about 2 inches piled up). nevertheless, i thought they were pretty hefty for their small size. but at $2 a taco, i think it's worth dishing out a few extra bucks for 3 or even 4 tacos (honestly, i would've been ok with just 2 tacos. i know! me!) 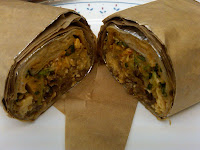 the burrito was good too, though i would opt for the tacos. i had the beef short rib burrito and felt that the seasoning on the beef was too ... sweet. the burrito was wrapped in a flour tortilla and then toasted on the outside (which i think is great!). the burrito was also filled with some of the seasoned lettuce as well as some rice (i think?) and eggs. normally, i'm a fan of eggs, but for whatever reason, i wasn't expecting them in this burrito, so it sort of too me by surprise. i think next time, i'll try to spicy pork one. or be sure to ask them to hold the eggs (haha). or maybe just load up on tacos and think nothing of the burritos. who knows! of course, this is just a personal preference, as there were loads of people walking away with burritos. definitely worth $5!
be sure to check out their where-abouts online and get there early! you don't want to be the one right behind the guy with the sign ^_^ kogi truck, come to us on the east! thanks in advance~
online: http://www.kogibbq.com/
Posted by grace at 7:32 AM