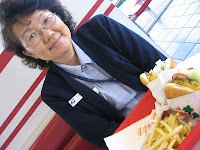 in 'n out
multiple locations
what was consumed: usually, set menu #2 - cheeseburger, fries, soda.
i love five guys, don't get me wrong. there's something about being able to pile your burger high up with loads and loads of extras, making your burger as high as it is wide. but i'm a so.cal girl at heart ... and my heart belongs to in 'n out.
i've been the the first ever in 'n out (that is, i've been to the one that they say is the first - in westminster). the simplicity of the burger, the freshness of the burger ... what more do i need to say?
from what i understand, there are no freezers at in 'n out. nothing is frozen; rather, everything is delivered fresh, cooked fresh, eaten fresh. DELICIOUS. 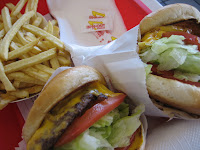 the burgers at in 'n out are fresh and delicious. in the words of christine, they have a clean flavor - agreed! you can get your burger made just the way you want - lettuce tomatoes, sliced onions, grilled onions, special sauce, ketcup, mustard. you can get it animal style (extra of all the toppings) or even the protein version (bun-less). i usually get my burgers with extra lettuce and extra tomatoes only.
and then, there are the fries. when i first tried them, i didn't think that they were anything out of the ordinary. that is, until i realized that they were so similar to my mom's - fresh cut, fried just right, delicious. i hear you can also get the fries special - covered in the special sauce or with cheese or with grilled onions or ... but i have yet to try it like that. yet.
i also remember the first time someone mentioned to me that the owners of in 'n out held steadfast to their christian beliefs. there's a note of "john 3:16" on the inside rim of all of their beverage cups. for whatever reason, in my youth, i thought that was a grand idea (though now i see it on the 'forever 21' bags as well as spray painted on many a freeway wall (what does that mean!??!)). now, even though i'm less comforted by those few letters/numbers (that's a whole other conversation), there's a part of me that is still intrigued, and almost amazed, by such an existance.
i miss in 'n out so much when i'm not in california. and when in california, i go out of my way to ensure that i have it ... at least once.
online: http://www.in-n-out.com/
Posted by grace at 10:00 PM

Wow you totally have your mom's eyes and smile. She's so cute!