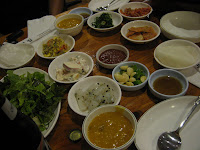 oegadjib
7331 little river turnpike, annandale, VA 22003
tel: 703) 941-3400
what was consumed: all-you-can-eat gogi! yum~
oegadjib (more or less) means "mother's house" in korean (that is, the house on my mom's side, that sort of thing. there's a whole explanation about korean society and culture behind all of this, but i won't get into that here. ask if curious/interested). in my attempt to find good korean food, friend leonard and i ended up at oegadjib. that is, once we found it. for whatever reason, it was hard to find. probably because it's in a sort of shopping center (different from others) and sort of set back, to the side (but behind) a salon/bath house. i remember making fun of it, but i'll have to admit it's been a bit of time since i've visited oegadjib.
above all else, i kept hearing about oegadjib for their all-you-can-eat special. oh, and that they have dduk-bo-ssam (a la sikdorak, etc. in so.cal). so, when i finally got the chance, i was super excited. they also have all-you-can-eat shabu shabu, but we didn't have that (everyone in the party has to eat the same thing - all gogi or all shabu shabu). 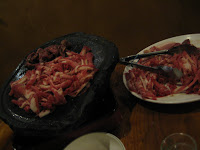 we opted for the all-you-can-eat gogi. yum.
once we ordered, the food came out pretty quickly. and once the plate of gogi was gone (primarily consumed by me - wtf, leonard? man up! haha), another plate was quicly offered. hurrah! on top of that, the beef was cooked on top of this rock-plate-slab-thing (i don't know how else to explain it ...). it cooked the gogi well and was quickly consumed (yes, by me).
the bahnchans were good and the meal also included dwenjang jjigae as well as gyerahn jjim (the steamed egg bahnchan - delicious. what korean bbq is complete without it?!). and so, i can definitely say that i enjoyed my meal. the downside? the dduk for the dduk bo ssam was totally not to my liking. -sigh- too bad! especially because i luuuuuuuuv dduk bo ssam (have i already mentioned that i have it at least once when in so.cal?). the dduk was mooooshy (i.e., overcooked) and not so good. sucks. but that's ok. everything else made the trip worth it.
so, all in all, delicious meal! i look forward to visiting again ... let's go!!! i hunger~
Posted by grace at 7:00 AM