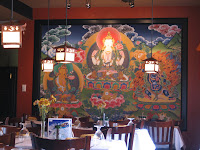 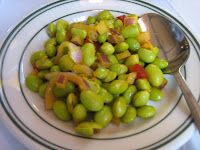 i really should update my food blog on an empty stomach. growl ...
these days, meeting with ines means getting together to chat and have some good food (i may enjoy these meetings more than she does, though i'm also convinced that our continuous meeting has some significance in your young life. i have to stay idealistic!). anyway, i had been meaning to check out 'himilayan heritage' for some time now. i had visited the same location when it was 'san marco' in my quest to find good italian food. sadly, san marco soon closed, but i was excited to see himilayan heritage open. what in the world is himilayan food? curiosity definitely took me over (turns out, himilayan/nepalese food is sort of a cross between chinese and indian cuisine. in fact, himilayan heritage has a number of dishes more typically associated with indian cuisine, but with a nepalese twist/with other spices and flavors). and then, some friends/co-workers visited himilayan heritage and raved about the cuisine, so (once i remembered, of course) ines and i head over to adams morgan to try for ourselves. 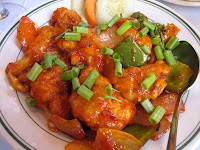 ines and i walked in around noon to find the restaurant completely empty. what does this mean? hmm ... and during our meal, just one more table came in. i imagine it's because of the time of day as well as our visit being on a sunday. no matter - as we walked in, we were immediately directed to one of their many tables (we were given some options - yay options!). upon quick glance at their rather large menu, i realized i had no idea what i wanted (per usual). i proceeded to ask our server about what was good, what was popular. her knowledge of the menu and popular dishes among diners was definitely a plus as we proceeded to order some popular dishes as well as the special of the day (an aside about specials: do restaurants have specials because they want to highlight something or because they have a lot of leftovers/extras of a particular dish that they 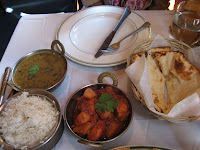 want to get rid of/sell? i really hope it's the former, but i've seen the latter actually be true. sigh. oh well~).
we started with the gobi manchurian, a sort of sweet-and-sour-esque dish made with a cauliflower-like (i could've sworn it was cauliflower, but it's gobi ... ?) vegetable. the veggies were dipped in a sort of batter before being fried, and then doused with the sauce. a nice alternative to meat-y sweet-and-sour dishes with just the right amount of sweet with sour. i wish there were more gobis and a little less other veggies (i know - i am not one to decline veggies!). additionally, after a few bites, i proceeded to take the gobis out of the batter (per usual). 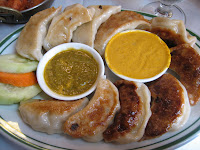 soon after, our entrees were served. we ordered the chicken dumplings, steamed the pan-fried. the dumplings definitely had a lot of filling and the ginger (i think ginger) flavor was really strong, but delicious, coupled with the chicken. i think the ginger, not only being a great flavor-er in and of itself, it also is supposed to help diminish the sometimes stinky poultry smell/flavor that overwhelms poultry dishes. the dumplings came with two sauces for dipping, both of which i tried, but didn't particularly enjoy. that is, i was not accustomed to their flavors, thus making me less likely to dip into them with great zeal. i had a number of tastes, but the flavor continued not to appeal to me. the dumplings on their own were flavorful, so i quickly forewent (what's the past tense of "to forego"?) the dipping sauces and enjoyed the dumplings on their own. on an aside (again), have 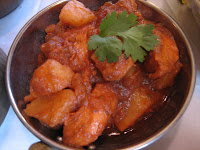 you noticed that in most cultures, there is some sort of traditional dumpling-like dish? mandoo, chinese dumplings, pierogis, empanadas, even calzones! interesting ... the chicken vindaloo was delicious and just a bit spicy (as in spicy-hot). i wasn't sure if ines would be ok with it, only to remember that she had mentioned enjoying spicy-hot food. i'm not sure if special nepalese spices were used because it tasted much like other vindaloos i've had in the past. we proceeded to dig into our dishes with great force (haha). and, per usual, we had too much for the two of us, so we got our leftovers wrapped and i sent them home with ines (she later told me that her brother greatly enjoyed our leftovers - haha).
if i had any complaints, i'd have to say that once our food was served, our server completely disappeared. it then took what felt like eons to get our check and head on out of the restaurant. maybe she forgot that there were patrons? sad day. no matter - i look forward to trying other options himilayan heritage has to offer. YUM!
online: http://www.himalayanheritagedc.com/
Posted by grace at 12:20 AM