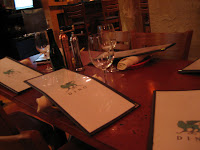 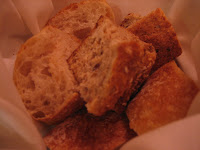 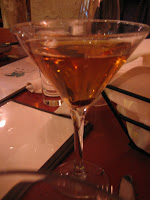 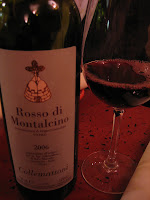 whew. that's a lot of food.
so, the dc eating crew aka grub club rang in the new year with our first meal ... at dino! thanks again, jenny, for organizing!
while waiting for others to arrive, drinks were ordered. i was thinking that i should've sat at the bar because they have complimentary antipasti (but i didn't). i will have to next time, though - the olives looked really good. i ordered a rob roy. i thought that was the name of the drink that i like, but it turns out it's not. the rob roy was good, but my search for the name of the drink that i like continues! i should just go back to the bar where i had it before and ask the bartender. but i digress. as the rest of the party joined, we dove into the bread along with some really good wine. we then quickly proceeded to order our RW meals. 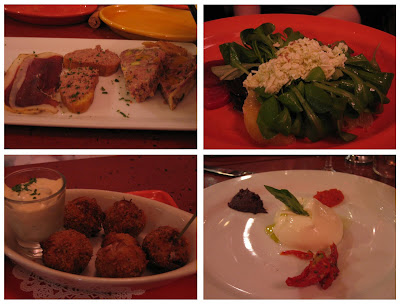 course 1. a series of super yummy starters. i ordered the pate (you know me and pate). i wish there was more fegatini and proscuitto because those were my favorite things in the collection. i probably would eat a whole plate of the fegatini and proscuitto. yay for salty and cured meats and pates (yes, despite all of the conversation i hear about how duck pate is made. sigh). the other pates were good, but maybe too complicated in their flavors for me. of course, that didn't prevent me from consuming the plate (haha). others ordered a number of super yummy dishes. citrus-y greens, mozerella flown in from italy (or so we were told), and fish balls! you can't go wrong.

course 2. the pasta course. except i didn't order pasta. duck confit was on the menu! and arugula! i couldn't resist. the duck confit was nicely prepared, crisp, with just the right amount of duck fat that oozed out when i cut into it and mixed in with the arugula salad. my friends were generous with their sharing - they are caring! the wild boar ragu, the sausage sauce ... delicious! 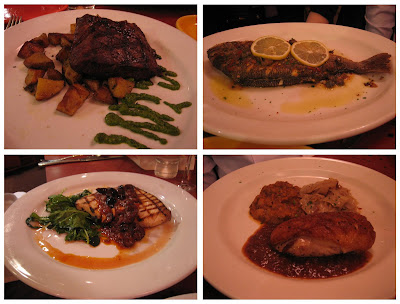 course 3. my main entree - steak. i was torn between the steak and a spare rib dish (which, i was told, was flavorful, but fatty ... which is probably why it was so flavorful - yum). the steak was nice and juicy, cooked medium rare. the steak came out a little more rare than i thought it would, but i still enjoyed the flavor of the beef. then again, i love steak in lots of different forms. the roasted potatoes that the steak came with, though, were a little over cooked. sadly. i love potatoes! but i couldn't finish these. alas. oh, and the steak dish also came with a green pureed sauce (the salsa verde) that i was sort of confused about. it had a good flavor, but i wasn't sure what the sauce was for. so the salsa verde stayed on the plate. though by this time, i was so full that i wasn't thinking too much of what was left over on my plate. the fried whole fish, though, was probably the best of the entrees (even better than the steak!). seasoned well, crisp, cooked just right. ahhh~ oh, and the conversation about eating fish eyeballs was definitely interesting. hahaha~ 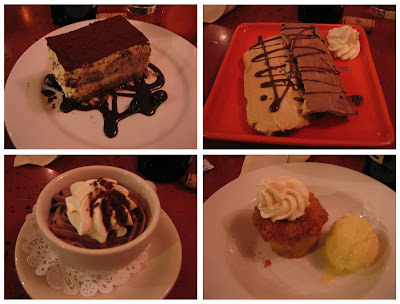 dessert. of the 7 of us, only one of us (jason) actually ordered dessert as a part of our RW meal. but, as you can see, there were quite a few other desserts that came with our meal. the gelato (cold, sweet and creamy, and delicious), the nutella creme (a sort of thick pudding, rich in chocolate/nutella-y flavor. just an espresso cup full would've been enough for all of us, but it was more the size of a cup of coffee. definetly for the chocolate lover~), the bread pudding (that came out warm! coupled with the ice cream, the bread pudding was delicious. quite a contrast from the other desserts that were chock full of chocolate and other sweets) ... but my favorite was tiramisu. light, moist, not too sweet. it was like a puff of delicious dessert once placed in my mouth. there is just no other way to describe it. and i normally don't eat a lot of sweets! we were comped these desserts (minus jason's tiramisu, of course) because 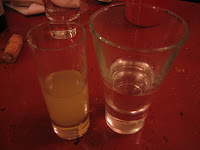 01) we were hit on the head by some other restaurant patrons who, on the 2nd floor, had file folders filled with papers. i don't think it was intentional, but it fell on our heads. well, not all of our heads. thanks for takin' one for the team! haha ... and 02) we (apparently) were given old menus, altering what we ordered. neither one of these things were a big deal, but we were comped nonetheless. that's the interpretation i got from what our server said. no matter - it was a generous act by the restaurant and we were happy to receive it! thanks!
the end of the meal also came with coffee and aperetifs (of which i chose limoncello - yum). others had grappo and that was really strong smelling. the limoncello, though on the sweet side, was what i call a great dessert! haha ... what a great way to end a ginormous meal! so full. i literally rolled home, thinking about the rest of the dino menu and what i would have the next time i visit. i hope it's soon!!
online: http://www.dino-dc.com/
Posted by grace at 5:45 AM