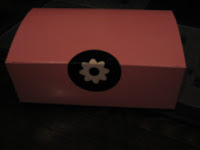 georgetown cupcake
1209 potomac street NW (between M street & prospect street), washington, DC 20007
tel: 202) 333-8448
hours: tuesday-friday 11am-7pm, saturday 11am-9pm, sunday 12pm-5pm
neighborhood: georgetown
what was consumed: obviously, cupcakes!
i'm not a big fan of sweets. i once told christine that her friend (who bought her chocolates) didn't know her (ergo me) well because we would both appreciate a bag of good beef jerky any day over a box of fancy chocolates (haha). point is, i like to taste, but i hardly crave and only occasionally eat regular amounts. in fact, there are times when i'll think i'll want something sweet (e.g. fruity cocktail) only to not finish because it has, within the time frame of one drink, to become too sweet. but i digress (per usual).
despite my sort of adversion to sweet things, i have found myself trying a lot of cupcake places in and around the dc/metro area. and let me tell you, there are quite a few. i've written already about hello cupcake (my personal fav, thus far), but georgetown cupcake was probably the one that put these cupcake houses on the map (or maybe it was cake love. point is, georgetown cupcake was/is super popular).
so, last birthday, i came home to c&j wishing me a happy birthday with a box of georgetown cupcakes (thanks, kids! haha). we are korean (christine and me, anyway. jess is an honorary korean - haha) and in addition to seaweed soup (the traditional korean birthday food), cake has become almost a required component to celebrating birthdays in korea (shoot, cake is almost a required component to anything in korea these days). i have purchased cupcakes for christine's past 3 birthdays, so it was nice to be the recipient this time around. 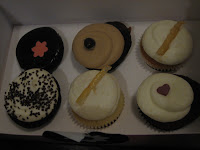 now, while hello cupcake is my favorite, i will say that georgetown cupcake isn't all too far behind. their cakes are soft and moist, and their frosting is sweet, though not too sugary. they have a nice combination of flavors that make the small cake quite a lovely and delicate end to a meal or a snack in and of themselves. much like may other cupcake places, georgetown cupcakes offers a variety of different options. their red velvet cake is delicious - the cream cheese frosting has just a tad bit of sweetness and the cream cheesiness shines through. delicious! their lemon tart cupcake (or whatever it's called) is also yummy, though i prefer my lemon tart cupcake with a bit more lemony-ness and maybe a bit more tart (odd, i know, because i'm also less of a fan of sour things). it was actually this lemon tart cupcake that makes me like hello cupcake more (well, the lemon tart and the carrot cake and peanut butter/chocolate cupcakes, come to think of it - i guess that's quite a few). that and because hello cupcake is currently in a more convenient location (but now that i have a 4-wheeled vehicle, that may change - yeehaw!).
all you cupcake lovers out there! it would be a shame, no, a tragedy, for you not to make it out to georgetown cupcake. go, take a look, taste, and enjoy!
online: http://www.georgetowncupcake.com/
Posted by grace at 11:32 PM

next time you are in ny. i will take you to cakeman. hands down the best red velvet.

I haven't tried Georgetown Cupcake yet, but I have been to Baked and Wired, also in Georgetown, where I had a strawberry cupcake. It was delicious but I got a major sugar rush headache after! I'd still recommend it though - we should go sometime!