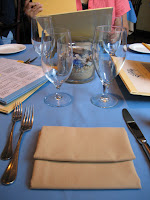 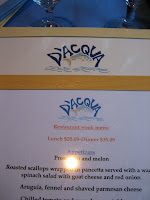 d'acqua
801 pennsylvania avenue NW (between 8th street & 9th street) washington, DC 20004
tel: 202) 783-7717
what was consumed: restaurant week! roasted scallops wrapped in pancetta served with a warm spinach salad with goat cheese and red onion; arugula, fennel, and shaved parmesan cheese; stozzapreti pasta with rock shrimp, mussels, and cherry tomato in a roasted zucchini sauce; rockfish fillet lightly fried in pastella "italian tempura" served with mashed potato duchesse; beef scallopine in a wild mushroom sauce served polenta; chocolate ganache cheesecake; pear and custard mousse sponge cake
the last of my restaurant week meals ... sigh. i love RW. the idea of having tasting menus and for chefs to have the increased breadth and share their creations with people who would otherwise not even consider their fine establishments is great (and not only for the economy, but also for the taste buds! hurrah!).

i had only heard about d'acqua in passing and new it was in that area in penn quarter with all those other restaurants. i have to admit, though, that it hadn't occurred to be to visit any time before RW. anyway, our meal began with some nice bread and then our appetizers. the bread with the tomato on it is my favorite! i love tomatoes. i thought it odd that they only brought out 3 of each when there were 4 at our table. maybe that's just how they do it, i don't know. i just felt bad that one of our group (i don't remember who) didn't get to have a bread with a tomato. and if she didn't want it, i was sad that i couldn't eat it for her (hee hee - oink oink). but that's ok. our appetizers slowly came out after that and my pancetta wrapped scallop was de-licious! the bed of spinach it came on was deliciously seasoned, making a great addition to the seafood and pork combination (i wish scallops were bigger - sometimes i feel like i could eat dozens of them that have been well prepared. dozens.). and, of course, there's nothing like a good arugula salad. combined with the cheese, fennel, and dressing, it was a light way to begin. myrna said she couldn't eat it all, so the rest of us polished it off for her (after our initial taste, of course).

our entrees slowly came out after that. i saw the seafood pasta on the menu and was immediately sold. while not a fan of the type of pasta that was served, it was nice to fill my belly with carb-y goodness. the pasta was a little overcooked on the outside and a bit undercooked on the inside (one of the difficulties with cooking that sort of pasta), so while much of my pasta was left over, there was quite a bit of seafood in my dish that filled me right up. the grilled rockfish, though, was delicious, as were the mashed potatoes it came with (but myrna got that, so i got something else). d'acqua is supposed to be known for their seafood (italian style?), so i imagine that they are the preferred dishes. the beef was nicely cooked in a good sauce, but others felt that the sauce was a bit bland. i thought it was fine and enjoyed the shared bits that came my way. and my love of polenta was fed as others were not so keen, so i ate the yummy polenta in the yummy sauce for them ^_^ thanks, ladies! hee hee. so, per usual, i "looked forward" to dessert with an already full stomach.

dessert! yum. it's restaurant week, so i thought they'd come out with "tasting" desserts. but no, not these italians! they brought out large slices of their dessert deliciousness. i opted for the chocolate cheesecake (as did pam), but after a few of the rich rich bites, i had to stop (pam took the rest home - i hope she enjoyed!). the pear and custard mousse cake was also quick light, fluffy, and moist. myrna (uncharacteristically) ate the entire thing - good job!
all in all, i'll have to the meal was pleasing to the stomach. if i had any qualms, it would be with the waitstaff. while it was restaurant week, it was a rainy day, so it didn't look like a lot of people were out and about. on top of that, the restaurant was hardly even half full with a number of different servers, food runners, bussers, etc. but it took what seemed like forever for the server to come and take our order, refill beverages, bring out the bill, etc. i was thinking that maybe it was because i was really hungry, but the others in my group agreed with me. sigh. oh well~ we all left with full bellies. literally, bellies.
friend dave (who went to d'acqua a few days before me) said it best - d'acqua has solid food. more or less, i agree! now, if only my waitstaff experience had been different ...
online: http://www.dacquadc.com/
Posted by grace at 3:32 AM