amsterdam falafelshop
2425 18th Street NW, washington, DC 20050
tel: 202) 234-1969
hours: sunday-monday 11am-midnight, tuesday-wednesday 11am-2:30am, thursday 11am-3am, friday-saturday 11am-4am (yay for such a great late night eating option!)
what was consumed: falafel (duh). fries and soda on occasion ...
i'm relatively new to falafel. that is, it's only in the last 5-ish years (that's a not a long time for me - shuddup, i'm getting old) that i actually started to consume mediterranean/middle eastern cuisine, including the likes of falafel (my only regret is that i started to enjoy it so late in life ... sigh).
in the bay area, i enjoyed many a schwerma place as well as the falafel drive-in (which has also been featured on guy fiore's "diners, drive-ins, and dives" or whatever show on the food network). i'm sure i will find myself blogging about the falafel drive-in one of these days. at the drive in, they would sell falafel (i referred to them as "falafel balls") sans pita, sans veggies ... just the falafel ... for 25 cents a piece (i don't know how much they are now). they're not huge falafel, but i felt the 25 cents was reasonable. i'd get myself a nice bag of 'em on eat them on my drove home. ahhh, yet another joy in the bay area. i miss it!
anyway, i had heard about a falafel place with a falafel fixin's bar that served just falafel (sandwiches) and fries. this was my kind of place! the downside was that it was in adams morgan and, at the time, getting to adams morgan was a royal pain in the arse (it still is today, but i'll suck it up and head on over there). one day, i finally made it. and boy, was i glad i did! 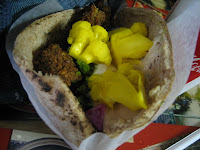 so, here's how it works. once at amsterdam falafel, you get in line and you order - small or large, white or wheat (i usually order the small, especially if i'm getting fries). the difference is in the size of the pita the falafels come in as well as the number of falafel that fill the pita. next, you pay (CASH ONLY - they have an atm inside the eatery) and wait for your falafel. once it comes out, you crush the falafel balls a bit inside the pita (as to allow them to spread throughout the pita as well as absorb the great fixin's) and proceed to the fixin's bar. at the fixin's bar, you proceed to fill your pita with as much stuff as well fit, but be sure to spread it out throughout the pita so that when you bite into it, you're not getting a mouthful of fixin's in one spot and not in others. for the bulkier things (e.g. cucumbers), i often find myself helping myself by putting them outside of the pita, but inside of the wax paper wrap that the pita and falafel come in (they don't have forks and plates and stuff. while they do have "to go" wrapping things, don't ask them for it if you're not really taking your falafel to go. and even if you are, don't ask for it!). some people will put their falafel in the cups that are there (or other fixin's in the cups) as to maximize on the fixin's, but i try not to do that (i think it's sort of ... tacky (no offense), but that's just me). i can barely finish what i put in my pita as it is.
from the fixin's bar, i like to get the garlicky spread, the spicey spread (they're labelled as such), hummous, cucumbers & tomatoes, chick peas (if i have room), and tahini paste (if/when i remember). is there anything else? i'm sure i'm forgetting something. when people ask about it, i just tell them "get what looks good - i'm sure it is" - ha!. with my fries, i'll get the mayonnaise (one of the few times i like mayonnaise) and a little bit of the peanut sauce. i usually only have a little bit of it, but i usually can't leave without at least a taste of it.
i'll sometimes take the long walk from work, pick up the falafel, and walk back to work, enjoying the falafel on the way. for real, i'm addicted. i love it. sometimes you just crave the combination of spice and garlic along with all of the other fixin's. YUM. this is making me hungry. if it wasn't (weren't? darn the conditional!) so hot these days, i'd probably be all about the amsterdam falafel today ...
i've been to other falafel places in town and, more often than not, if a mediterranean/middle eastern eatery has falafel, i will try their falafel (at least once). i will have to say, though, that amsterdam falafel is my preferred location and where i default to when craving delicious falafel. oh, amsterdam falafel, i will be back! and it will be often~
online: http://www.falafelshop.com/
Posted by grace at 1:00 AM